From an early age, Camille Taver discovered an attraction for the piano and particularly for musical digressions around the melodies heard during his childhood.

His training was therefore built, from the start, by combining learning the piano and classical musical language with improvisation and composition.

At the end of his studies at the Conservatoire National Supérieur de Musique et de Danse de Paris (CNSMDP), for which he was awarded six first prizes, he then co-founded a collective of composers and arrangers.

in addition to the soloist and chamber music repertoire, Camille is interested in the relationship between voice and piano. He thus collaborates with lyrical artists such as Gérard Théruel, or the young talents of Opera Fuoco, directed by David Stern.

Concerned by the transmission of his art to a large audience, he officiates as choir director and pianist for Lacryma Voce, bringing together more than 300 amateur choristers. In order to facilitate access to music to the most impoverished he created in 2018 the first choir of Restos du Coeur. 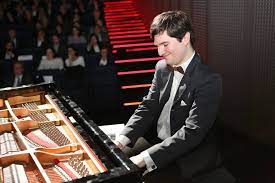 As a musical creator, After having developed his universe with Jean-François Zygel, Camille now leads a career as a pianist-improviser. He gives recitals, but also works for the theater, putting to music poetic texts with the actor Eric Auvray, or for the cinema, accompanying silent films during cine-concerts, in particular at the Jérôme Seydoux Pathé Foundation, and the Cinémathèque Française. Camille Taver performs in France, Germany, China, but also very far underground and underwater, being passionate about speleological diving