This adventurer, great lover of ice, does not hesitate to lead expeditions in sometimes very hostile areas, in Greenland for example.

Alban started scuba diving at the age of 11 in a pool in Troyes. The passion has never left him since.

During his teenage years he explored the lakes and rivers of the region and discovered underground diving in the Côte d’Or department. 1999 he became a professional diving instructor and spent several seasons in Morzine, Corsica, Port Cros Island and Porquerolles.

In 2000 he became the owner of the ice diving school in Tignes (Savoie). He makes live the adventure of the exploration under the ice to thousands of people. This school became in 2008 the reference in terms of training for diving under ice thanks to his experience and is sponsored by the French explorer Jean-Louis Etienne.

With the CING (Centre National d’Instruction Nautique de la Gendarmerie) in Antibes, Alban is an advisor for ice diving and helps to set up a protocol for the divers of the Gendarmerie which allows them to evolve under the ice in complete safety.

In 2005 he became the owner of Vasques du Quercy, an underground diving school located in the Lot, near Rocamadour. Alban became one of the first professional trainers in France for this type of diving.

In 2010 he participated in the polar expedition “Deepsea Under The Pole”. During this expedition, a team of 8 people including 5 divers explore the underwater face of the ice pack at the North Geographic Pole. This adventure lasted 45 days and 51 dives were made under the ice pack. The team had to be evacuated in advance because of the ice breakup which occurred earlier than expected. The book “On a marche sous le pôle” (We walked under the Pole), which tells the story of this expedition, is prefaced by the French explorer Jean-Louis Etienne. A fantastic adventure that allows him to improve his skills.

In 2012, Alban organizes a second expedition, this time on the east coast of Greenland. He leaves with his friend Vincent Berthet, one of his teammates on the previous expedition “Deepsea Under The Pole” to the North Pole. They will travel together more than 1000 km by sea kayak. Alban plans to dive under the icebergs and takes all his diving equipment in his kayak. This expedition lasts 51 days and 16 dives are made.

The famous French sailor Maud Fontenoy, who is the godmother of this project, prefaces the book “Le Piège Blanc” (The White Trap) which recounts the expedition.

Georges Pernoud, the presenter of the TV show “Thalassa”, also wrote a word about this incredible human adventure.

The film shot during part of the expedition (directed by Thierry Robert and produced by Le Cinquième Rêve) is broadcast in the program “Thalassa”, which records one of its best ratings of the year 2013. It will then be rebroadcast on the channels Planète + Thalassa, TV5 Monde among others. 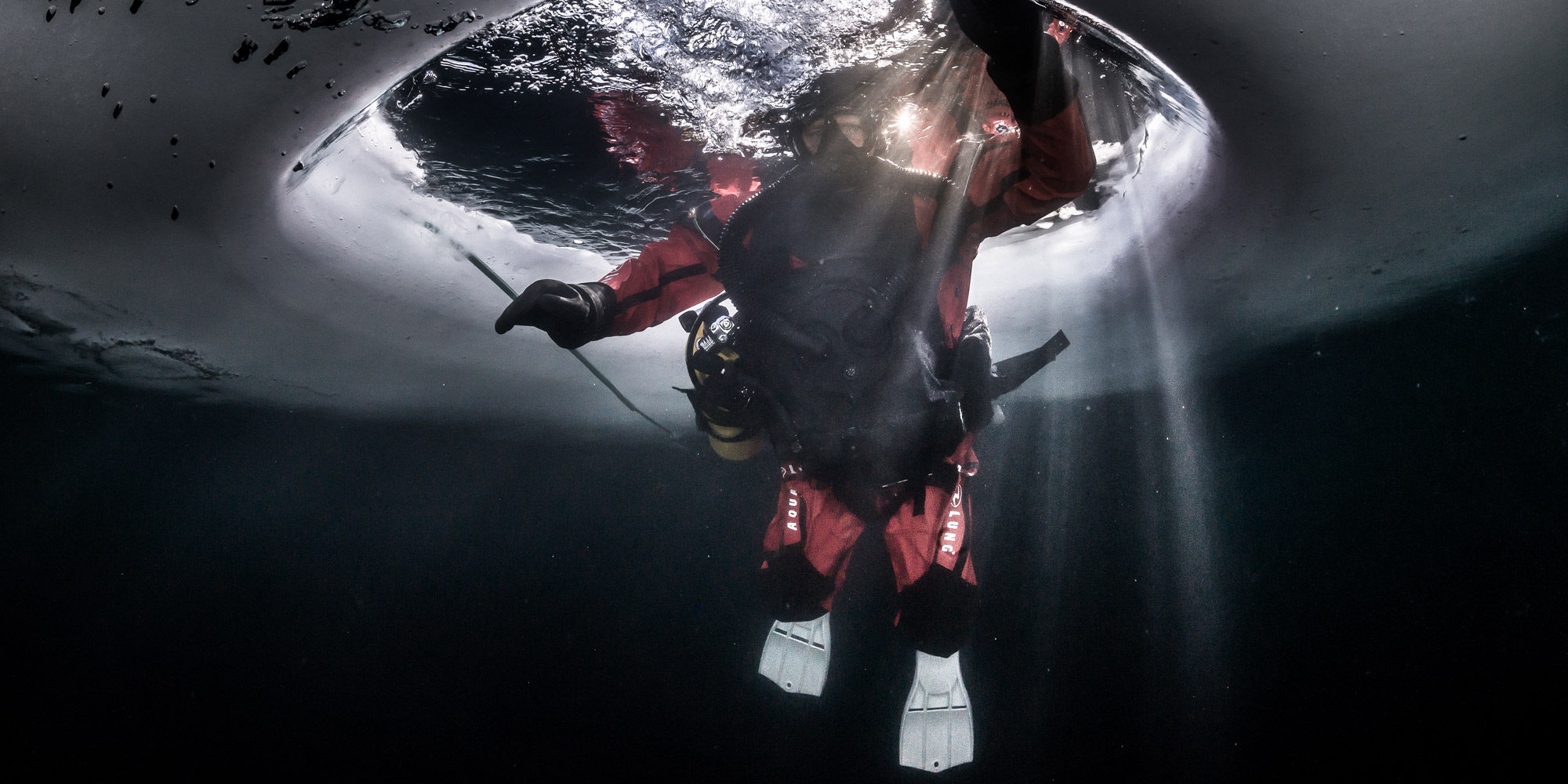 Alban also works since 2011 with the travel agency “Abyssworld” and supervises trips to Siberia, Lake Baikal and Antarctica. He is the referent and specialist for cold waters.

Referent and technical advisor for some films, Alban Michon has worked for ” Taxi 3 ” by Luc Besson, ” Un Lac ” by Philippe Chindrieux or ” De Rouille et D’Os ” by Jacques Audiart.

Alban also uses his skills as a speaker, he travels to companies to address topics related to the management of an expedition and risk, such as stress management, decision making, project management, inter-professionality, finding its priorities, alone is good, several is better …

In 2013, he was a member of the jury for the “Explô” competition, a program on the France Ô television channel. This contest aims to find the new adventurer of the year 2014. The jury, chaired by the journalist Laurent Bignolas, is also composed of Sonia and Alexandre Poussin, Philippe Poupon and Géraldine Danon, Christine Janin and Maud Fontenoy.

In 2014, Alban focuses on values that are dear to him: the pursuit of his dreams and the idea of making others understand that we all have a treasure buried deep within ourselves. He gives lectures, festivals and school visits to make people aware that, despite the difficulties of life, one should never give up and continue to believe in oneself.

At the beginning of January 2014, Alban Michon leaves for Mongolia with a young teenager of 19 years old to meet the nomadic people, reindeer herders, the Tsaatan. They live several days with them in tepees. Alban makes the young man aware of certain priorities. A successful experience that allows him to ask himself new questions. A great adventure for both of them.

He also supports the association “Roule Toujours” of Lucie Carrasco, fashion designer suffering from a genetic disease, to help her pursue her dreams.

In 2016 / 2017, Alban participated in the filming of the movie L’Homme qui voulait plonger sur Mars (The Man who wanted to dive on Mars) broadcast on France 5. This documentary, directed by Thierry Robert and produced by the company “Le cinquième rêve” with Nicolas Zunino, takes up the new challenges of space conquest and the Mars Mission. By following Alban as an explorer and his dream, the viewer is taken on a scientific journey.

In 2018, Alban realizes the Arktic expedition in winter on the famous and mythical North West Passage. An extreme adventure in solo on the ice floe which lasted 62 days and was close to temperatures of – 55°C.